Home » C365 News » Behind the Scenes at Penlee during rehang week

Behind the Scenes at Penlee during rehang week

Some real heavyweights of the art world will be descending on Penlee House Gallery & Museum in Penzance this June.  Not quite what you would expect, these supersized monsters form part of a collection of Victorian paintings by artists of the Newlyn School who worked in west Cornwall in the 1880s and 90s. Not content with just producing small pictures suitable for a genteel drawing room or parlour, they worked on a grand scale, making art that they hoped would hang in the huge galleries of the Royal Academy in London and sell for considerable sums.

We’re hanging our next exhibition, ‘Cornish Light: Nottingham 1894 revisited’ which opens on 20 June 2015 and features over 60 paintings inspired by a ground-breaking exhibition of 1894. Over a century ago, a visionary curator named Harry Wallis brought together an unprecedented number of paintings by artists from Cornwall in a single exhibition at Nottingham Castle Museum & Art Gallery. Although smaller in size, ‘Cornish Light: Nottingham 1894 Revisited’ recaptures the spirit of the original exhibition by gathering some of the best pictures from this period in an exciting collaboration between Penlee House Gallery & Museum in Penzance and Nottingham Castle Museum & Art Gallery. 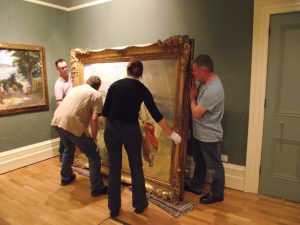 Two trucks transport the work down to Penzance from Nottingham and it takes a dedicated team of six people to heave the works into the building. Originally built as a domestic house, Penlee has standard-sized door-frames, so we’ve had to measure, measure and measure again, just to check that the biggest pictures can fit through the doors. With their ornate gilt frames and heavy wooden backboards, lifting and carrying these precious pieces takes planning and close teamwork, and we try not to think about the value of the works as we heave them into position!

Key to the success of the exhibition is lighting. We’ve started the process of changing all our gallery lamps to more-efficient LED spotlights, alongside the old tungsten-halogen lamps, so we hope the public won’t notice where the old set ends and the new set begins. Gallery lighting is advancing with great strides at the moment and I’ve been told that the new lamps won’t need their bulbs changing for twenty years! We work hard to maintain the correct light levels, eliminating all ultra violet light from the galleries and keeping visible light (Lux) to the correct levels: 50 Lux for watercolours and 250 Lux for oil paintings. Sometimes hanging an oil painting next to a more fragile watercolour can be a challenge, but our Technical Officer, Richard, checks the levels with his light-meter and positions the lamps to give just the correct amount of light for each work, using floods to light whole walls where the paintings are all of a similar type.

Labels in place, and walls neatly touched-up, it’s time to open the doors to the public. We’re hoping for a good audience this summer, the high drama, sentiment and nostalgia that characterises much of Newlyn School painting should be a popular mix. Surprisingly, though, in their day, the artists of the Newlyn School were at the fore-front of the avant-garde and modernity. Artists such as Stanhope Forbes, Frank Bramley and Elizabeth Armstrong had honed their skills in art studios on the Continent, using revolutionary techniques such as painting the model out of doors (rather than artificially lit in a studio) and using a new innovation, the square-tipped brush. The Newlyn School artists were described as exponents of the revolutionary ‘spot and dab’ school, which meant exactly that: rather than paint outlines, they used their square brushes to dab the paint on to the canvas, creating startlingly realistic effects, much like the new art of photography. 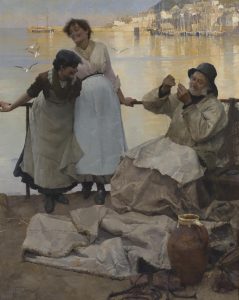 The Newlyn artists observed the hard-working people of west Cornwall, focusing on their daily lives with forensic detail. ‘Cornish Light: Nottingham 1894 Revisited’ shows some of their finest pictures. Highlights include ‘Frank Bramley’s epic painting about loss at sea and its devastating consequences, ‘A Hopeless Dawn’ 1888, on loan to the exhibition from Tate Gallery and Stanhope Forbes’s enormous ‘The Quarry Team’, 1894. My particular favourite is the joyful ‘Eyes and No Eyes’, also by Frank Bramley. Penlee is the only gallery in the UK dedicated to collecting and exhibiting the work of the Newlyn School of artists and ‘Cornish Light’ shows that you don’t have to visit London to see great art. The organisers of the original 1894 exhibition would, I hope, have approved.

Louise Connell has been Director of Penlee House Gallery & Museum since 2013. Before that, she was Director at Falmouth Art Gallery and has worked in museums and galleries for twenty years. She lives in St Just with her partner and two children.