Newquay gets ready to host the 2018 Esedhvos Festival of Cornish Culture.

Newquay’s hard working local organising committee are busy working with bards of Gorsedh Kernow putting the finishing touches to this year’s Gorsedh Kernow Esedhvos Festival of Cornish Culture, being held in the seaside town of Newquay, one of Cornwall’s major tourist destinations.

“As an old Newquay boy, the town is very dear to my heart,”said Grand Bard Merv Davey, Telynyor an Weryn, as he prepares to lead the celebrations for the final time as Grand Bard, “and I know that I am passing the crown to an extremely capable successor.”

The Esedhvos Festival starts on Wednesday 29th August and on Thursday 30th the programme includes a mini Literary Festival featuring – “Meet the Authors” from Gorsedh Kernow’s Holyer an Gof Awards scheme.  Audience members will have a chance to listen to live interviews with prize winning authors and contributors including Deputy Grand Bard elect Pol Hodge, Hilary Coleman and Sally Burley, Trounce Guy and illustrator Martin Impey. Gorsedh Kernow will also launch several new books at this event including ‘Cornish Bards of Newquay’ plus new publications from the Cornish Language Board, the Old Cornwall Society together with the much anticipated second edition of the Cornish Learner’s Dictionary.

Later that day locals and visitors will have a chance to view the newly opened exhibition of Adults and Young People’s Awards winners work which will be on display alongside the historic Grand Bard’s Chair in the Hotel Bristol, while that same evening the Gorsedh Kernow Awards presentation evening, compered by bard and member of Fisherman’s Friends, Jon Cleave, will be held in the hotel’s ballroom when winners will receive their Awen medals and certificates from the Grand Bard.  All are welcome to attend this free event.

The one day Conference on Friday 31st August will once more tackle a thorny issue, and this year it will be exploring “Cornwall’s Cultural Assets – Time for Change?”

“Cornwall’s distinctive culture is a major asset that impacts upon the health and economic well being of our community,” said Grand Bard Merv Davey, Telynyor an Weryn, “and now is the time for Cornwall to take control of her own cultural destiny and to capitalise on the opportunities this offers.  In this our 90th anniversary year we have once again lined up an impressive range of speakers for our Conference.” 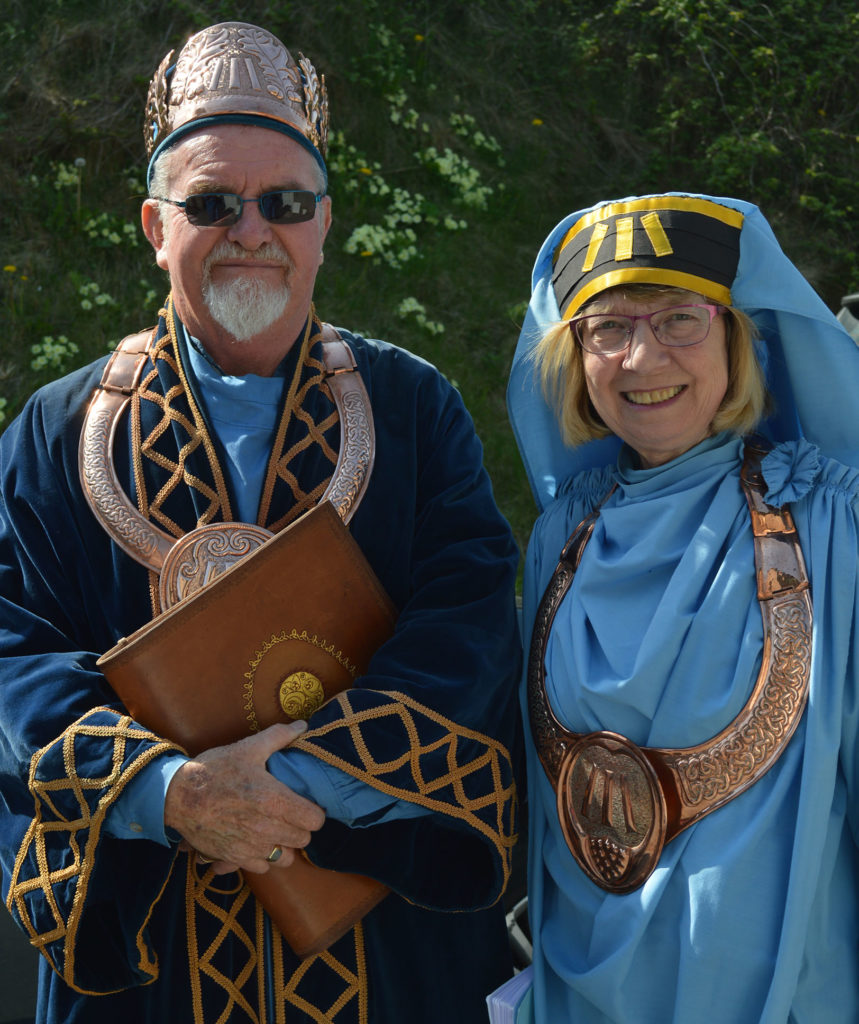 Among many other events in this year’s packed schedule is a special performance of ‘Tide & Time’, Newquay’s seafaring past brought to life through one woman’s timeless story, a Troyl/Ceilidh with the ever popular North Cornwall Ceilidh Band plus special guests Kemysk Cornish Dancers, and the much loved gala concert on the Saturday evening with local performers and entertainers including Newquay Band, singing group Oll an Gwella, Cornish duo Davey & Dyer and the Grenaways. Later on the Saturday evening there will be a “Come All Ye” Cornish music and song session at the Great Western Hotel’s Steam Bar, hosted by Matthew Clarke.

On the Sunday there is a chance to try your hand at Cornish in the “Blas a Gernewek” taste of Cornish session being held in the Cribbar, followed by a heritage walk around the town with Len Sheppard and finally Evensong in the Cornish language at St Michael the Archangel Church.

The centrepiece of the Esedhvos Festival of Cornish Culture will be the 2pm blue-robed bardic ceremony on Barrowfields (right opposite the Hotel Bristol at Narrowcliff) on Saturday 1st September where 16 new bards will be initiated in recognition of their outstanding work in serving Cornwall and her distinctive Celtic identity.  It will also feature the installation of a new Grand Bard, Elizabeth Carne, Melennek, of Newquay and a new Deputy Grand Bard, Pol Hodge, Mab Stenak Vur. Entry is free and there will be plenty of space for the public to come and watch.  Stalls with Cornish themed goods will be open from late morning alongside a demonstration of Cornish wrestling and a chance to visit the amazing Cornish Embassy and Tick Box Bus. Refreshments will be available all day.

Acknowledging the enormous amount of local help received, the Grand Bard praised the efforts of all the volunteers on the local organising committee.

“We are very grateful for all the help we have received,” said Merv Davey, “everyone is so busy these days but members of the local community understand Cornwall’s unique and distinctive culture and the importance of keeping it going.”

Meur ras! / Many thanks!