Telegraph Museum Porthcurno opened its new exhibition Hidden Heroes with an official launch party on Bank Holiday Monday 28thMay, with over 100 visitors coming along for the special 1940s themed event.

The new exhibition tells the stories of how ordinary people did extraordinary things during World War 2 to keep communications running. This feature exhibition for 2018 focuses on the stories of the Cable and Wireless employees during WW2. These people undertook incredible feats to make sure global communications were kept operational throughout the war, and their actions defined the Allied strategy.

The exhibition was formally opened with speeches from the Patron of the PK Trust, Lady Banham MBE, and our Chairman of the Board of Trustees, Professor Gareth Parry.

We also hosted the formal prizegiving for our recent community 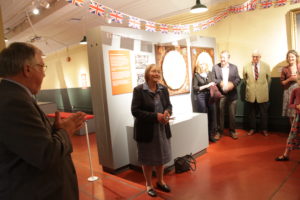 photography competition, with the four winners receiving their awards.

The Museum celebrated the opening with the sounds of 1940s music all day, joined by a troupe of swing dancers dancing up a storm outside the Museum’s iconic tunnels. Staff and visitors came along in Forties fancy dress to add to the atmosphere – including one little boy who came along as an evacuee, complete with gas mask, label and teddy bear!

Charlotte Todd, Deputy Director of the Museum who curated the exhibition over a 12 month period, said:

“It was wonderful to have the exhibition officially opened and to see visitors enjoying the displays. The World War Two bomb that was dropped on a nearby farm was a definite talking point in its new prominent position inside the Tunnels. It was lovely to see everyone enjoying the 1940s swing dancing, which created a wonderful buzz around the museum. Thank you to everyone who came to join in the celebration”.

Come and see the actual bomb that fell on a nearby farm and hear the stories of the Cable and Wireless staff who worked here. Find out about the daring work needed to allow cable ships to keep telegraph cables operational and discover more about the part telegrams played in times of war.

The Telegraph Museum’s wartime tunnels have had significant investment of over £200,000 to undertake this refurbishment, and the Museum team have spent the last 12 months curating this interesting new exhibition. 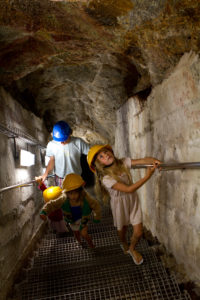 We are telling the story of World War 2 as experienced by Cable and Wireless employees – both those who worked at Porthcurno and those operating cable stations in London and around the world.

Discover the brave story of John Robins and others who were taken as prisoners of war by the Japanese after they stayed behind in Singapore to make sure communications remained active. John Robins was separated from his family for almost four years, and we have transcripts of his POW diary providing an insight into his experience in the war camps. Learn about the Telcom Girls – the first time women were sent abroad by the company, with the job of following the armed forces and re-establishing communications centres as the Allied Forces advanced.

See the inside of telegraph stations from London to Malta and the technology that would have been used. Find out how the work undertaken here in Porthcurno, and the war itself, impacted on the valley. See footage of daily life in the valley and discover diary excerpts from local people.