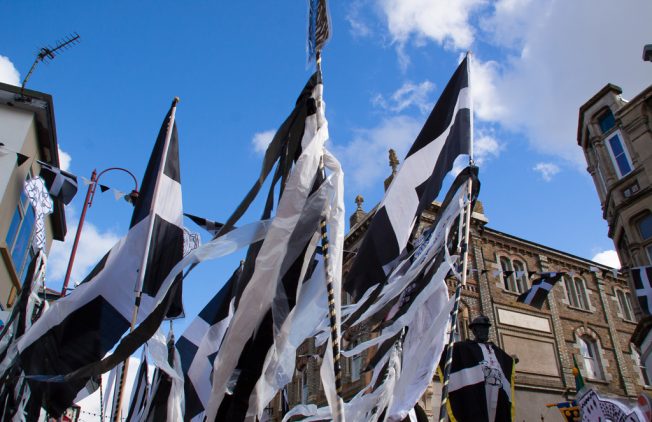 I had a sort of odd itchy feeling that perhaps I or Cornwall should be doing more but I had no idea what.
Or if I was allowed?
I had no idea how to scratch the itch.

I must explain, I grew up in a very different Cornwall.
When I was a pupil at Helston School I learned about St Piran.
I was not actually at school at the time.
I was standing in the Gift Shop of the Model Village over in St Agnes.
I used to love the model village but like so many local families we would only ever go out of season and my only memories of it are in the pouring rain.
A tiny little world in the rain.
The gift shop was a warm damp place with steamed up windows and Cornsh piskies everywhere.
Just everywhere.
In a stand next to the tea towels there was a pen with a flag on it that looked like the cross of St Andrew but wrong and black.
So I asked the woman behind the counter what it was and she told me it was the Cross of St Piran, patron saint of Cornwall.

I actually learned about St Piran from a Gift shop.

I lived in Cornwall and I learned about my own culture from a souvenir shop.
There’s a weird closed loop of culture feedback for you.

These days it seems almost impossible for such a thing to have happened.
I talk to festival organisers each week and the huge amount of events and happenings across Cornwall around Pirantide is astonishing and growing year on year.
I remember five thousand people from all over Cornwall taking the walk across the dunes for the Piran Play. In those days when it was THE celebration to head for. Now many of those people can celebrate in their own towns, in their own way with their own communities with parades, music, singing, dancing and drinking.

Lots of people talk about the drinking.
What do you want of us world?
He brought brewing to Cornwall. How are we supposed to celebrate? I am as fond of tea with no sugar as the next person but every once in a while it’s good to celebrate one and a half thousand years of brewing here in Cornwall. But the story of Cornish food and drink has been snowballing in the last few years as well, nowadays Cornwall’s ability to stock a good table and fill a good glass on a festival day is world beating.

So now I find myself standing in a different Cornwall than the one I grew up in, how to celebrate, how to scratch the itch?

In the absence of a family tradition we make our own.
This is what I think:
Do something that makes you happy.
Walk the coast, stamp across the moor, climb the hill, see the land, drink in the sea and then join the parade, dance the dance, sing the song, eat the food and for heaven’s sake, for the sake of the Saint himself, for the sake of every one of us that will be doing it with you, raise a glass of whatever you feel and remember:
He is your Saint,
This is your day.
This is your Cornwall.

Notes:
Finding pout about St Piran can be tricky, even in history he posed a bit of a problem. He suffers from an erasure from history that’s common amongst the Cornish Saints.
The “Every-Day Book,” has the following remarks on St Piran :
“This saint, anciently of good repute in Cornwall… is reported,’ says Porter, ‘to have wrought manie wonderful miracles in his lifetime, which, because they tend rather to breed an incredulous amazement in the readers, than move to anie workes of virtues or pietie, we have willingly omitted.'”

In other words, he did a lot of brilliant things that really got people talking but because his deeds were not all what one might exactly call ‘Saintly’ much of the story was gently forgotten about or even buried by the Church in the past.
One of the less controversially Saintly miracles was the discovery of tin in his hearth.
It is one of the more Historically controversial though so given that in pre-Roman times there are examples of tin smelting in Cornwall we should probably say ‘re-discovery’.
“St .Piran’s day is said to be a favourite with the tinners. Having a tradition that some secrets regarding the manufacture of tin was communicated to their ancestors by that saint, they leave the manufacture to shift for itself for that day, and keep it as a holiday.”

There are references to St Piran ‘inventing’ brewing in Cornwall, again somewhat controversially from both a Historical and Saintly point of view. Questions of timeline and morals aside the promotion of the brewing process as a way of killing bacteria in water would have been a positive one and certainly the vast majority of people, including children, would have been drinking (weak) beer on a daily basis until just before the industrial revolution. This would have been a miraculous gift to Cornwall, cutting disease and infections right down.
In a post-industrial world however, any modern day celebration of the ‘inventor’ of brewing would look decidedly less miraculous.