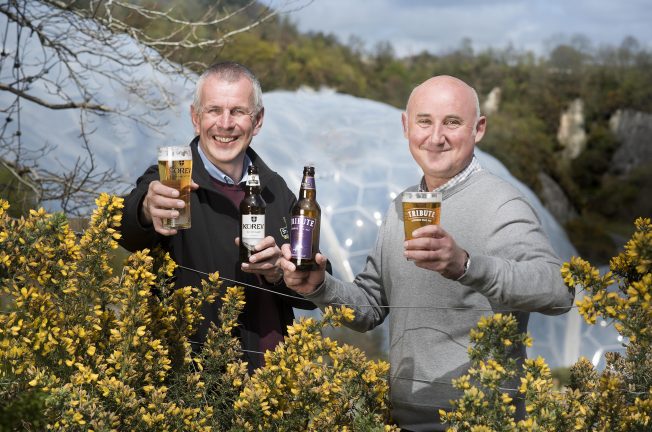 Korev lager at the Eden Sessions plus a year of Eden Project-inspired ales are just two of the exciting prospects of a new agreement signed between St Austell Brewery and Eden. The agreement forms the backbone of a long-term ‘working in partnership’ vision between the two organisations.

As part of the deal, St Austell Brewery has already scheduled the brewing of four Eden-inspired draught ales on its new Small Batch Brewery the first of which, Bourbon Vanilla, was met with critical acclaim by ale aficionados at pubs across the county and beyond.

Brewed using Bourbon Vanilla Pods sourced via the Eden Project, this special porter will be followed later in the year by an Eden Gorse Beer, with gorse picked by the Eden team, a Black and Gold Honey Beer – using Eden’s Black Bee honey – and an IPA Citrus with Lime and Lemon zest.

All of these ales will be available at pubs forming part of the company’s new Small Batch Beer Club.

As part of the latest agreement, St Austell Brewery retains its role as wholesale supplier of beers, ciders, wines, spirits and soft drinks to the Eden Project and supporter of the Eden Sessions, meaning St Austell Brewery favourites Korev Cornish Lager and Tribute Ale are set to quench the thirst of music fans at each event through the summer.

James Staughton, St Austell Brewery Chief Executive said: “As two neighbouring organisations who share a love for our region and a commitment to developing the local economy, I am delighted that St Austell Brewery will be continuing our relationship with the Eden Project and working together over the next 3 years.”

Andrew Holden for the Eden project said: ” It has been evident that working closely with the St Austell Brewery team of experts and harnessing the knowledge of the Eden team has resulted in a much improved selection of Eden inspired beers with three unique bottled ales now sold exclusively at Eden and two Eden house wines blended and designed by the Eden and St Austell buyers – I see this as just the start and now with the new Small Batch Brewery the future is very exciting”.

The new agreement also means that St Austell’s Brewing Experience Visitor Centre will feature a permanent ‘Pit to Paradise’ exhibit about the Eden Project and will be able to sell tickets for Eden.
As well as at the Eden Sessions, the Brewery’s award-winning beers will be available for sampling at a number of different Eden-based events across the year, including the Eden Beer Festival, the World Pasty Championships, Eden Marathon and the Food and Drink Festival. In return, foodies can look forward to the delicious prospect of Eden-inspired dishes such as crispy Korev calamari in the Eden Mediterranean Terrace Restaurant.

With staff promotions included to help strengthen ties between the Brewery and Eden, the new ‘working in partnership’ agreement looks set to bring great benefits to both organisations and, more importantly, to create more exciting experiences across the year at both venues for both local people and visitors alike.