As part of the ground-breaking new exhibition, ‘Tattoo: British Tattoo Art Revealed’ which is on display in Falmouth, until January 2018, the National Maritime Museum Cornwall have joined forces with handmade British jewellery designers, Tatty Devine, to create a bespoke new collection of pieces inspired by the first celebrated female tattoo artist, Jessie Knight. Tatty Devine, renowned for their playful work with laser cut acrylic jewellery, have created two delicate and striking pieces – made from birch wood digitally printed from Jessie’s original drawings – to honour Jessie Knight and her impact on the tattoo world, drawing inspiration from her distinctive artistic style. 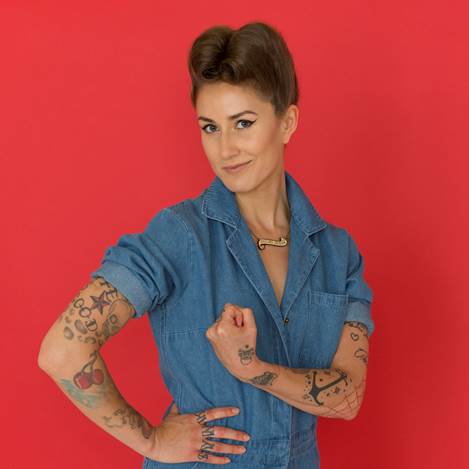 Jessie Knight was one of the first recorded female tattoo artists in Britain, beginning her work in the tattoo sphere as early as 1921, in her hometown of Barry, South Wales and working until she retired in the 1960s. Her aesthetic championed the female physique with bold and sensual depictions of hula Hawaiian and sailor girls.

After joining the circus with a number of her family members, Jessie made a name for herself tattooing everyone from the working classes and armed forces, to some of Britain’s aristocracy. She learned her craft from her father, Sailor Knight – another prominent tattoo artist of his time – and broke down walls of female expectation in a time when women were to be seen and not heard.

As part of the National Maritime Museum Cornwall’s ground-breaking exhibition, a number of Jessie’s previously unseen pieces of artwork have been revealed to the public in the biggest display of tattoo artefacts and paraphernalia the UK has seen in any one exhibition. The Tatty Devine necklace and brooch, priced at £20 and £25 respectively, will be available from Tatty Devine’s stores and website as well as the gift shop of the National Maritime Museum Cornwall.