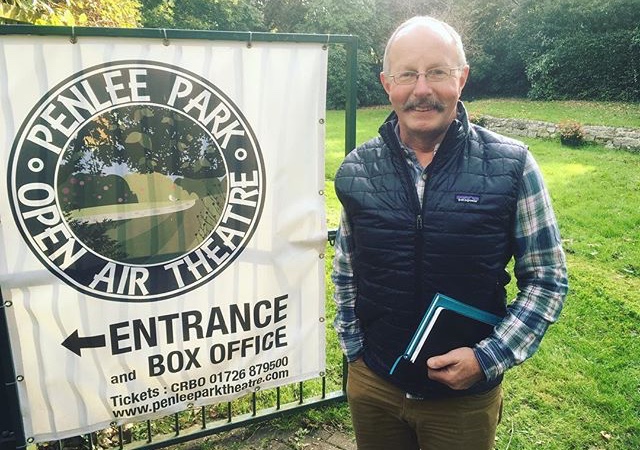 It’s July and we’re delighted to welcome Dave Hunter as our new Ambassador of the Month. Dave runs Penlee Park Open Air Theatre and is the Artistic Director at Cornwall Youth Theatre Company. He has been involved with hundreds of local performances and is passionate about the arts so we couldn’t wait to steal five minutes of his time to hear about his most memorable experiences and favourite places.

I formed Cornwall Youth Theatre Company with Marion Newby in 1984 , and have worked with over 4,000 young people on over 85 productions resulting in over 500 performances. I am a former board member of the Arts Centre Trust and Restormel Arts and currently a board member at The Acorn, Penzance and Chair at Carrick Sport & Recreation Centre in Truro – still working with young people, our last production was Nick Darke’s The Riot at The Minack. I am now running, with Shazz Andrew and a fab team of volunteers, Penlee Park Open Air Theatre in Penzance, where profits go towards supporting the work of the youth theatre. This season we have over 40 events in the theatre in the park in the heart of Penzance. Full details can be found here. 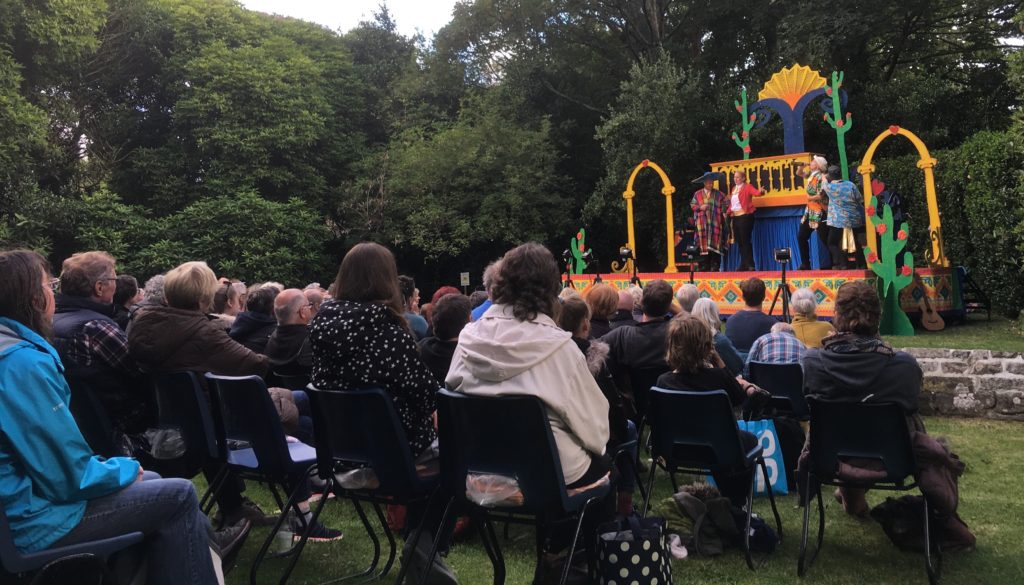 Email listings are a great way to inform – I’m always amazed by the variety that Cornwall has to offer and how often events are running in the least expected locations.

So many choices, working with Nick Darke, Mike Shepherd, Alison Dures, Dave Mynne, Tristan Sturrock and Giles King on Hell’s Mouth, part of the 1992 RSC Schools’ Antigone Project, at The Acorn, Launceston College and The Other Place in Stratford. I was the lighting designer and it’s exciting, and quite humbling, to now be working with many of that young cast as adults, who are now working in the arts industry. Surfing at Porthleven in the 70’s with only 3 people out, our wedding reception at The Beach Hut at Watergate Bay and visiting The Eden project, under construction, and being hauled up into the biome while a rigger played saxophone. Plus so many volunteer opportunities working with Ross Williams and ACT volunteers promoting theatre in wet fields, barns and courtyards! As a callow youth, in 1972, I worked for the late Chris Tyler at Skewjack Surf Village at Sennen. There’s a classic-of-its-time photo of me with Gill McNeill sitting on my knee. Gill is now a very respectable fellow board member at The Acorn. 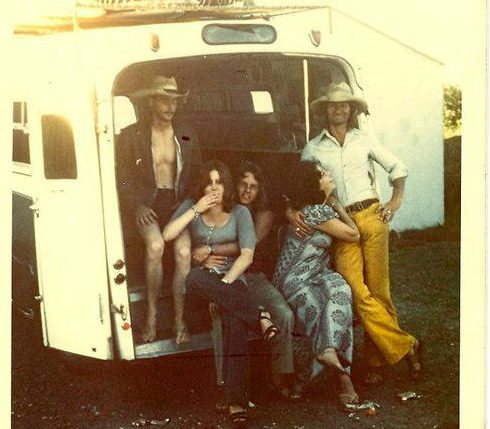 My summer is largely in Penzance, so it’s a dip in the Jubilee Pool, lunch at Duke Street Café in Newlyn and then the sunset on the prom and a film from our Cinema in the Park Season. This all applies even if wet

Phew, difficult question. It’s got to be a party for as many of the ex-CYTC members we could assemble in Cornwall. It’d be quite a large party. We could put a marquee on the prom in Penzance.

I’ve worked on a number of site-specific performances but it’s got to be the concept and experience of turning the stage in the The City Hall (now HfC) into an auditorium by closing the stage curtains and adding in raked seating for a performance of The Ancient Mariner – sails suspended, a mast and almost 100 people seated and over 30 in the cast. Health and safety would never let me repeat it!

No question. The Acorn in Penzance, it’s recently been re-furbished and it has a wonderful atmosphere. Largely run by volunteers, it’s the go-to music venue in Cornwall presenting a wide range for all musical tastes. 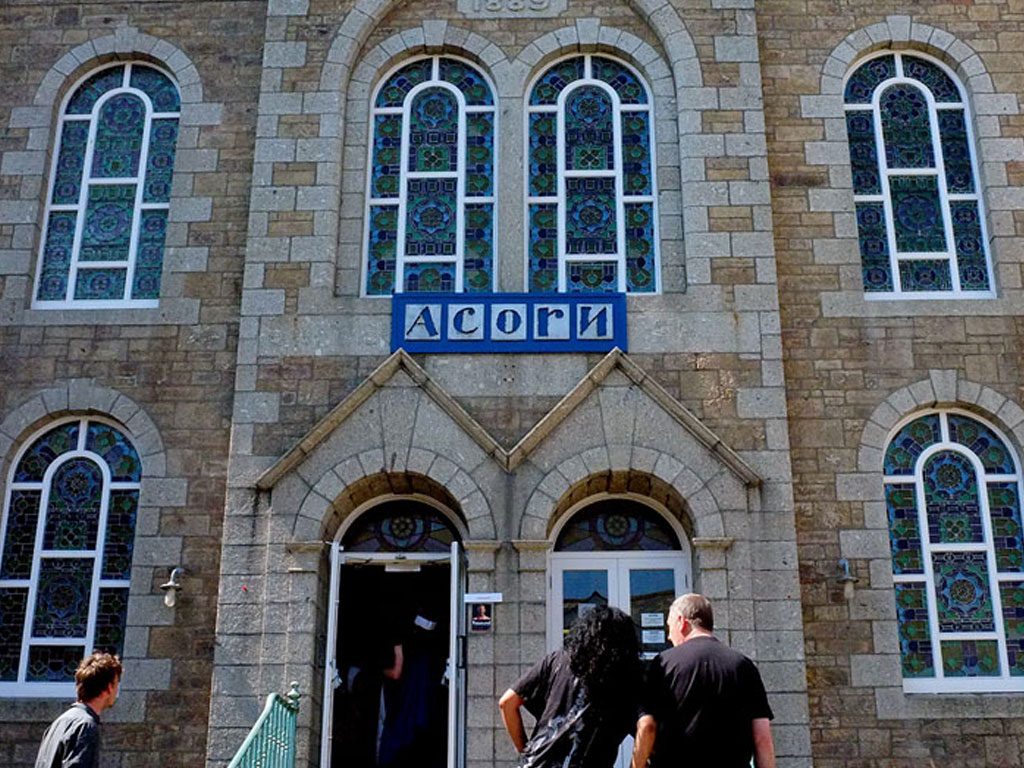 North on the South West Coast Path from Watergate to Mawgan Porth, it’s a constantly changing, sweeping panorama at any time of the day or year and there are great places to eat and drink at either end of the walk. Plus there’s a bus going in both directions if you don’t fancy the return leg.

I’ve recently been impressed by the Tremenheere Sculpture Garden cafe, their outdoor table setting is great plus, of course, The Honey Pot in Penzance; how do they make such consistently fab cheese cake? My latest favourite is from my pals at Polgoon Vineyard, their new outdoor café is simple stunning and I cannot beat their elderflower cider.

I once went with a group, at low tide, along the slippery concrete walk-way that takes you right underneath Truro’s Lemon Quay. We were constantly bombed by roosting pigeons and, at any moment, we all expected to slide into the mud.  One of those crazy experiences you wished you’d filmed. Sadly, it’s now walled off and largely inaccessible.

St Mary’s Church in Penzance hosts a series of classical music concerts organized by Nigel Wicken, it’s got a wonderful acoustic and it’s the only church I know that has a full alcohol licence! To sit in church with a pint is an unforgettable, unique experience and once hosting the Bournemouth Symphony Orchestra in a hotel ballroom in Newquay; the contrast between the sound of their fabulous Samuel Barber and the decaying grandeur of the location was as vast as the room.

Anywhere in the Lake District, there’s an expansiveness that feels much wider than Bodmin or Dartmoor. It’s so easy to walk and see no one.

The arts in Cornish schools? As an ex-Performing Arts Faculty Head, I’m concerned that more of us in the arts in Cornwall aren’t barking at our MP’s about the massively limiting effects of the introduction of the EBacc on the future of arts education. Any sense of experiment, of cooperation and investigation seems so stymied. It’s such a savage irony that I had a wider and richer arts choice when I was at school than one of today’s teenagers. We can’t afford to ignore what is happening in our schools and colleges because there is no way the Antigone’s Project could happen in our schools in 2018.