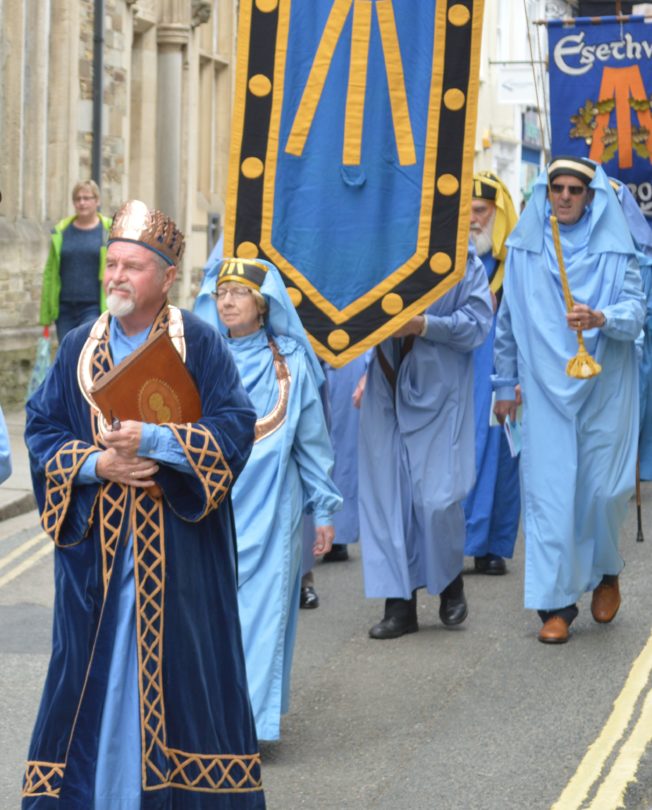 “Newquay is a town very close to my heart which has a proud place in Cornwall’s story. Although it has been a major tourist destination for more than a century it still maintains a proud local tradition of celebrating its Cornishness through culture and heritage while extending a warm welcome to those who come from elsewhere.”

With these heartfelt words in mind Merv Davey, Telynyor an Weryn, Grand Bard of Cornwall and passionate Cornishman, prepares to deliver his short address to Newquay’s townspeople and visitors on behalf of the bards of Gorsedh Kernow who will gather in the Killacourt for their annual Proclamation ceremony on Saturday 21st April.

Gorsedh Kernow exists to maintain and promote the national Celtic Spirit of Cornwall and to give expression to such spirit, to encourage the study of Cornish history and literature, the Cornish language, to foster Cornish art, music, dance and sport and to link with other Celtic countries.  In 2002, the Cornish language, Kernewek, was formally recognised by European Charter and the Cornish were given National Minority Status under the European Framework Convention in 2014; and the Devolution Deal of 2015 includes a clear commitment to cherish and promote Cornish Heritage.

“Despite the obvious importance of our culture and heritage it is constantly under threat” the Grand Bard will say, “and yet more and more we realise that these are essential for our own future sustainability.”

The Grand Bard is expected to challenge once again the status quo by calling on HM Government to honour its commitment to the protection delivered by legislation.  He will also urge Cornwall Council to recognise more fully the role of culture in our future lives.

“The importance of the work-life balance is universally recognised within many sectors” the Grand Bard will say, “and we know that culture and environment are key factors in helping people to achieve this balance and therefore the key to sustainability, a sense of well being and community.”

The Mayor of Newquay, Cllr Margaret North will welcome Gorsedh Kernow and formally invite the gathering of blue robed bards to hold their bardic ceremony and Esedhvos Festival of Cornish Culture in Newquay later in the year.

“Newquay is a symbol of modern Cornwall where we respect and celebrate the past at the same time as embracing the new and the opportunities of the future,” Merv Davey will say, “and on behalf of all my fellow bards I am delighted to accept this kind invitation from the Mayor and townspeople of Newquay.”

The Gorsedh Kernow Proclamation ceremony will take place at 11am on Saturday 21st  April 2018 in the Killacourt, Trebarwith Crescent, Newquay, TR7 1TG.  The procession of bards will leave St Michael the Archangel Church, St Michael’s Road, Newquay, TR7 1RA  at 10.45am.

Fiona Wotton is Director of Cornwall 365